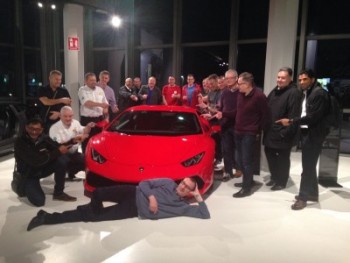 Tastings in Motor Valley: from November the 24th to November the 26th ITINERE welcomed 20 English hosts, who enjoyed a tour to discover the Land of Motors together with its famous car brands such as Lamborghini and Ferrari. They were also introduced to the great variety of culinary excellences as Parmigiano Reggiano, Traditional Balsamic Vinegar, Lambrusco and Parma Ham.

On the first morning the hosts had the opportunity to spend some time in the medieval center of Bologna, with the possibility to do some shopping and taste the real Italian pizza for lunch.  In the afternoon the group began the real Tastings in Motor Valley tour and was led to a free visit at the Lamborghini Museum, in Sant’Agata Bolognese, where they could walk among stunning cars which marked the history of the House of the Raging Bull. In the evening they were transferred to our hotel, where they could enjoy the welcome atmosphere of the Emilian tradition and the One Michelin Starred Restaurant offered a typical and rich dinner.

On the second day the English group discovered an organic cheese farm, where the traditional recipe of the well-known Parmigiano Reggiano was explained. It is made with the latest farm management technology and it is known as “unique” organic cheese. After that, our expert guide accompanied the hosts to visit the Panini Museum in Modena, where they could find unique pieces of Maserati Cars Collection of Umberto Panini, which represent the most important steps in the history of the Trident. The discovery of an acetaia (vinegar farm) and a winery in an astonishing place on Modena hills, gave the possibility to know how the iconic Lambrusco and Traditional Balsamic Vinegar of Modena are produced. In an area rich in terms of cuisine, the British had a gourmet tasting session of wine, different kinds of vinegars and local cheese, combined with a typical lunch surrounded by the nature. 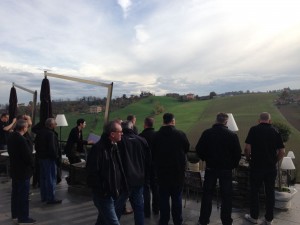 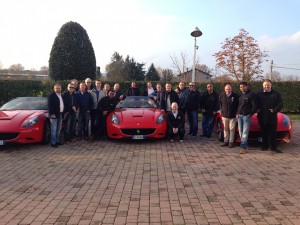 Tastings in Motor Valley gave the pleasure of visiting the Ferrari factory as a great chance to enjoy the historical collections of the milestones reached by the Prancing Horse and also to do some shopping in the store. The day continued with a special menu with gnocchi and tagliatelle (traditional dishes of this tasty region) in a trattoria between Reggio Emilia and Modena.

Last but not least, typical  lunch composed by different aging of the famous Parma Ham welcomed our British hosts together with a tour of a local ham factory. It was here where they enjoyed Parma Ham manufacturing process from start to finish, understanding every secrets beyond its goodness . Later they were accompanied to the woods, where black pigs are outdoor reared, to the biodiversity park and to the aging ham caves. Black pigs are important for this special farm, because they belong to an ancient breed that has almost completely disappeared. As a conclusion, a delightful tasting of this excellent and authentic DOP product was offered. Our day was a non-stop surprise since our visitors had the unforgettable pleasure of driving a real “Rossa” thanks to a Ferrari test drive.