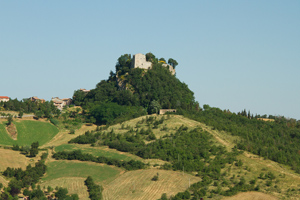 Canossa, located on Reggio Emilia hills, is the heart of the Land of Matilda. In an area full of  architectural and natural beauties, its name comes from the main castle, Canossa Castle, symbol of Matilda’s kingdom.

The land has been populated for hundreds years, even before the Roman period. Afterwards, it started to be considered as a strategic place for exchanges and commerce, due to its location on Apennines between Parma and Bologna and the passage of many ancient European roads leading to Rome, like Via Francigena an old path that it’s still traversed.
However, it was with the building of numerous fortifications during the Middle Ages that Canossa became the center of the European politics.

Matilda not only inherited a vast kingdom, with lands from high Lombardy to northern Lazio, but she was the most powerful woman of Medieval times.  The Great Countess, brave and determined, succeeded in standing out both as warrior and interlocutor between Empire and Church. The Humiliation of Emperor Henry IV, who waited for three days in January’s weather outside the Castle, in order to be received by Pope Gregory VII and beg for the abolition of his excommunication, is the main event that still marks this place. It is also remembered abroad with the way-to-say “Go to Canossa”, that means asking for forgiveness.

The hills of this area are characterized by a large number of castles, towers and citadels, all of them located in dominant positions and linked to Canossa. The remains of the main fortress and the National Museum are on a panoramic rugged cliff between the rivers Crostolo and Enza, surrounded by striking badlands.

The best way to know the place is surely retracing the medieval path that still connects all the main sites. Tosco-Emilian Appennine offers a rich network of hiking trails, combined with nature, history and gastronomy excellences.